Ahead of the launch of the fifth instalment of our Brewery Series, we caught up with Wayward Brewing Co’s Head Brewer, Shaun Blissett at the Camperdown brewery where all the magic happens.

During our chat Shaun gave us an insight into the creative process behind producing an experimental, boundary pushing beer for the GABS Festival.

In particular, he revealed the inspiration behind Wayward’s sensational Coffee & Donuts Milk Stout – a terrific collaboration with close neighbours, Grumpy Donuts and Toby’s Estate Coffee. If you’re a donut fiend, it’s a must-try! 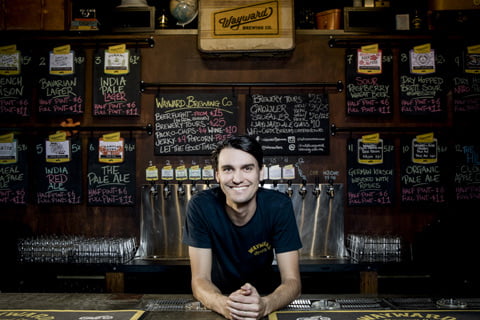 Can you share a bit about the creative process behind producing an experimental, boundary pushing beer for GABS?

We generally try to make a beer that we could see ourselves brewing again and drinking a lot of. Though when we brew beers for GABS we open it up to everyone in the company and sometimes we get a lot of great ideas, sometimes a lot of ridiculous ideas. We then work with both to try and come up with some interesting and brew-able.

We’re super excited to be featuring Coffee & Donuts in our Wayward Brewing Co. Pack. Tell us about the beer and the inspiration behind it?

Really we just drink a lot of coffee and we have Grumpy Donuts (aka Australia’s best donut shop!) all of 20 metres from the brewery so it made sense to bring it all together. We had experimented with 7 different dark ale bases until we found the perfect one, then built the beer from there. We balanced the dark base with lactose for sweetness and cinnamon and donuts for a spice dimension. The coffee, we had been working with Toby’s Estate for a fair while waiting for the right beer to use it in. We had it fresh roasted and cold brewed for 12 hours to get the right amount of character.

Why should beer lovers pay a visit to your brewery?

24 taps of independent craft beer in an incredible building with great food, popcorn and we’re dog and kid friendly!

Tell us your go-to beer(s) this winter?

As most people do when it gets cold, I’m leaning into darker styles, particularly some more old school European stuff like Belgian Strong Dark Ales, German Dunkels and Baltic Porters. From our own beers, Midnight Barley Cowboy Hopped Porter is a definite favourite at the moment, particularly with the Nitro cans, as it gives the beer such a great mouthfeel.