Ahead of the release of our Capital Brewing Co. Pack featuring the much anticipated Hang Loose Juice, we caught up with head brewer, Wade Hurley.

Wade hails from San Diego where he brewed for the likes of Green Flash and Coronado Brewing, so we asked him to share the key difference between the Aussie craft beer scene and what’s happening over in the US.

He also reveals the inspiration behind Hang Loose Juice and his favourite go-to Capital beers. 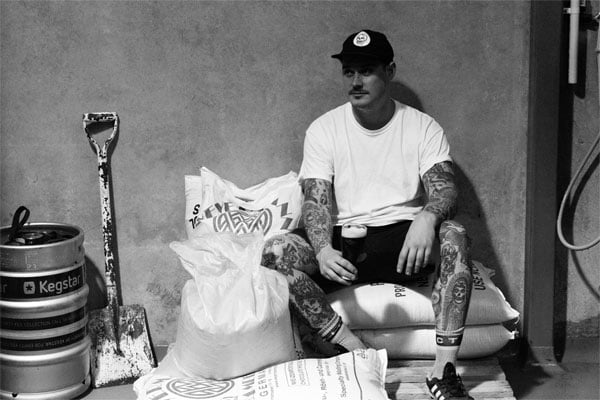 I was lucky enough to grow up in San Diego, which is the home of the West Coast IPA. When I was 18 my older friends were all drinking Stone IPA and Sierra Nevada Pale Ale which was a whole new flavour compared to the Keystone light and Budweiser I was drinking in high school. Once you start drinking good beer it’s hard to go back to the gross watered down lagers. Stone IPA was probably the beer that really got me into craft beer and started my home brew obsession.

How does Australia’s craft beer scene compare to what’s happening over in the US?

Australia’s craft beer scene has a couple of key differences compared to the US. In the US there isn’t many popular “craft” breweries that are owned by big corporate beer. Seems like most big craft breweries in Australia are owned by either Carlton, LION, or even Coke. Also the population difference really effects the craft brew industry in Australia. The US has so many more people, it’s easier for a small neighbourhood craft brewery to thrive and word of mouth travels much quicker.

How did it feel getting six Capital beers in the GABS Hottest 100 Craft Beer Poll earlier this year? What a cracking result!

It was such a great feeling seeing six of our beers up there. I was especially surprised to see Hang Loose Juice and Summit XPA in there seeing as how those beers haven’t been around for long.

There is a lot of excitement around the release of Hang Loose Juice – Blood Orange NEIPA. What’s the inspiration behind this beer?

I never got to experience the haze craze in the US, and I never had tried to brew a NEIPA until we brewed Hang Loose. I just wanted to give brewing a juice bomb a solid crack. I figured the juicer the NEIPA the more people enjoy them so I decided to throw a shit load of juice in there. I’m really happy with the way it turned out and I’m excited for people to check it out.

I guess this is like asking you to pick your favourite kid, but which Capital beer is your go-to?

I love IPAs and I go back and forth between Evil Eye Red IPA and our Rock Hopper West Coast IPA. But in saying that sometimes I want to drink something smashable and on those days Summit and Coast go down a treat and you can drink quite a few before making a fool of yourself. I guess I just said almost all of our core range is my favourite but like you said it’s hard to pick your favourite child!