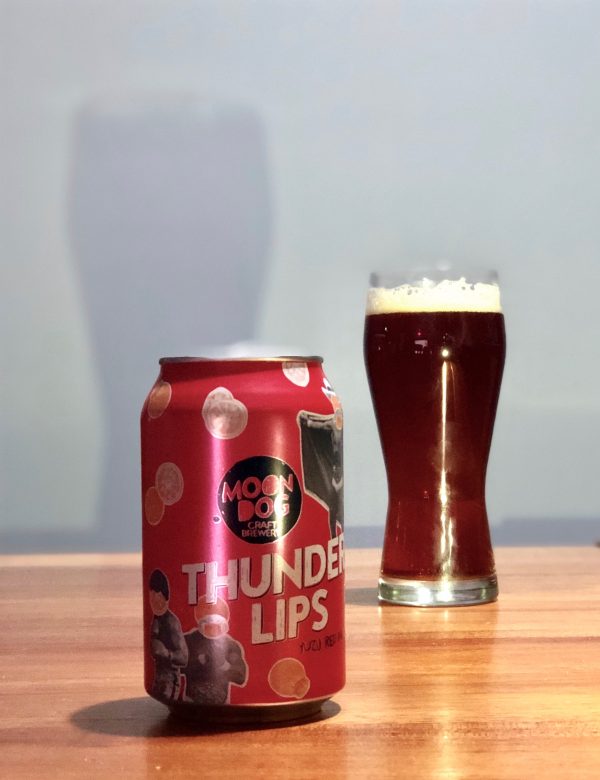 Today, I had the task of reviewing the re-release of Moon Dog Craft Brewery’s popular autumn seasonal, Thunder Lips Yuzu Red IPA. Tough job – but someone had to do it!

Hmm…Why did they call it Thunder Lips? More on that later.

Pouring a clear chestnut brown with a thin off-white lacy head. The bouquet has pronounced malt, caramel and toffee characters, followed by notes of berry and pine.

Yuzu is a citrus, akin to grapefruit. Overtones of mandarin make the flavour quite tart, yet fragrant. Moon Dog has successfully added this citrus into a Red IPA without losing its flavour. A light pepperiness, malt on the dry side, and a pinch of bitterness combine to create a Red IPA that is completely different to the other sweeter beers in its style.

It’s unique, I’ll give them that! But in all, a lovely lip-smacking beer – you could hear the thunderous sound when my lips gave their approval. I could easily down a few more of these as we move into the cooler months. What perfect timing to be able to choose a beer with the best of both worlds in mind; a hoppy IPA mixed with a sweet malty Red and the joy of citrus fruit.

Those that know me, know I love my reds and this one gets a big thumbs up from me. Proost!